Fall Guys Free For All: Season 1 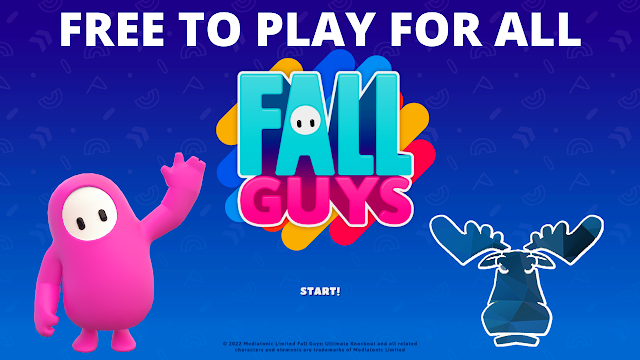 The day has finally arrived. Fall Guys, which was published for PC and consoles in 2020, is now available for free on all platforms. (PC, PS4, PS5, Xbox One, Xbox Series X|S, and Nintendo Switch). The game's release on the Nintendo Switch and Xbox will be a first, as will the Epic Games Store release for PC. PlayStation owners will have to switch to the free version, but they will receive the Legacy Pack, which features some cosmetic enhancements, as well as the premium Season 1 Battle Pass for free!
On this page:
Where to download Fall Guys
Legacy Pack Information
Season Pass Trailer
Release notes from FallGuys

Fall Guys has been withdrawn from Steam, which means it is no longer available for purchase (Epic Games acquired Tonic Games Group, the parent company Mediatonic March 2, 2021). However, if you have a copy, you may still access it through your library. Fortunately, Mediatonic will continue to support the game with updates. Which means, you are not required to migrate to the Epic Games Store. That's great news for those who don't have to worry about it. Oh, and you'll get the Legacy Pack for free, which includes some cosmetic enhancements, as well as the premium Season 1 Battle Pass!

For those who are new to the game, the only method to play on PC is via Epic Games. I am aware that some people disapprove of Epic Games and wish the game was still accessible for download on Steam. Sadly, this is the only option unless you bought it before on Steam.

According to the developer's Steam post, everyone who already owns the game on Steam will receive full support and all new updates.

Where can I download or install Fall Guys you ask? Here are the platforms:

After installing Fall Guys on my Xbox, I was requested to link my Epic Games account to Xbox. My first thoughts of the game are that it is enjoyable and can be incredibly enjoyable online with a bunch of pals. Unfortunately, I was eliminated with 16 people remaining and plunged into the slime. I wasn't ready, lol. The next bout went well. I was in the last one on the hex map when I fell down with three people remaining. Here are two video from my first two bouts.

I haven't had the opportunity to create or join a new party yet, but I will soon. Mediatonic has verified that cross-play and cross-progression would be included. This means you'll be able to establish a party with your buddies regardless of the platform they're playing on. That's fantastic!

Oh, and people who purchased Fall Guys before it became free will be pleased with this news. The following is a quote taken from their support page:

As thanks to all our amazing players that have supported us from our first stumbly step together, we’re going to be awarding a new Legacy Pack to everyone that picked up Fall Guys before going Free for All.

This bounding box of delights will contain a nickname, nameplate, the Regal costume, the Veggie Dog costume, the Feisty Dwarf costume – and a Season Pass for Season 1!

Once you login after June 21st, these will be automatically granted to you in-game. Your Season Pass from this pack will only be active for Season 1, so hop on and join us to make the most of it.

And yes! You will receive the Legacy Pack if you received Fall Guys for free via PS Plus.

You may buy the Season Pass with "Show-Bucks," an in-game currency. 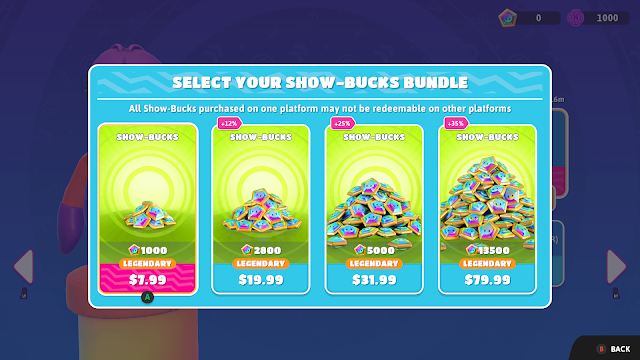 You may also use it to purchase stuff from the Fall Guys store, which you can buy costumes, emotes, and other items. There will be a free advancement route for everyone with some entertaining unlockables if you decide not to buy the Season Pass. You may earn 300 Show Bucks during the free path, and 1,200 Show Bucks with the Season Pass. Before I forget, there is also a "Legendary Season 1 Starter Pack" for $9.99 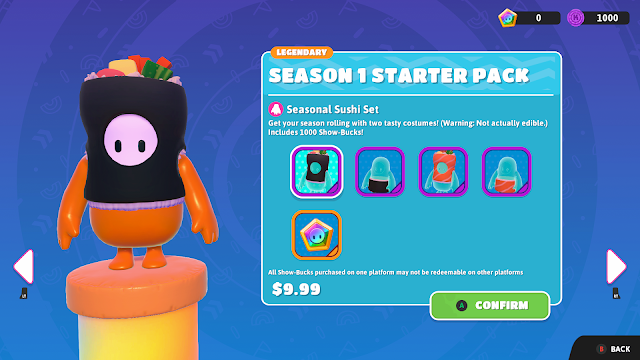 There will be 100 total tiers covered by the Season Pass. All players will be able to unlock 50 awards through the free progression route, and they may also choose to spend 950 Show-Bucks on the Season Pass to unlock all goodies. Anyone who buys the Season Pass will immediately be able to access the whole Ezio outfit for our upcoming debut season! 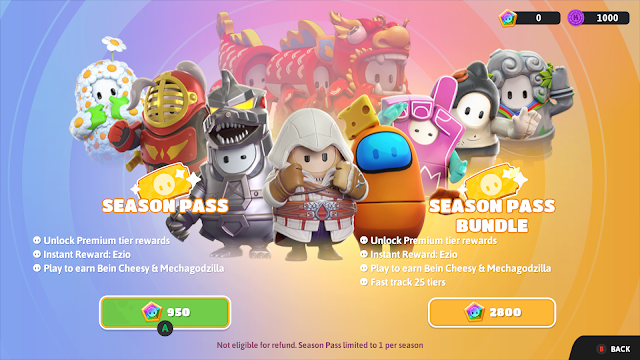 Get playing right away! I hope you take pleasure in it as much as I have. I'm eager to find out how many hours I'll be putting in.

NEW ROUNDS AND OBSTACLES!
Free for All features 7 new Rounds at launch, plus 5 brand new obstacles!

With the Season Pass, a new currency is being introduced called the Show Bucks. Players who are also pre-registered for the game will also get a series of exclusive rewards.

About: Fall Guys (formerly Fall Guys: Ultimate Knockout) is a platform battle royale game developed by Mediatonic. It was released by Devolver Digital for Microsoft Windows and PlayStation 4 on 4 August 2020. Following their acquisition of Mediatonic, the publishing rights were transferred to Epic Games, who released the game for Nintendo Switch, PlayStation 5, Xbox One and Xbox Series X/S on 21 June 2022. On the same date, Fall Guys switched to a free-to-play model with full cross-platform play support despite the Windows version was discontinued from further sales.[source wiki] 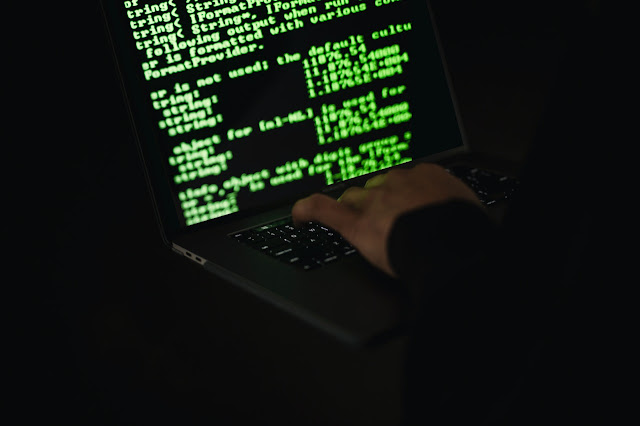 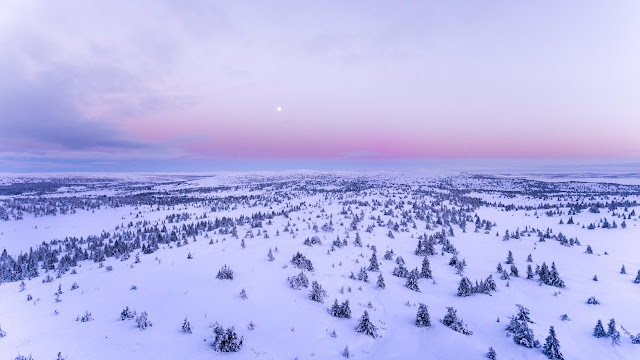